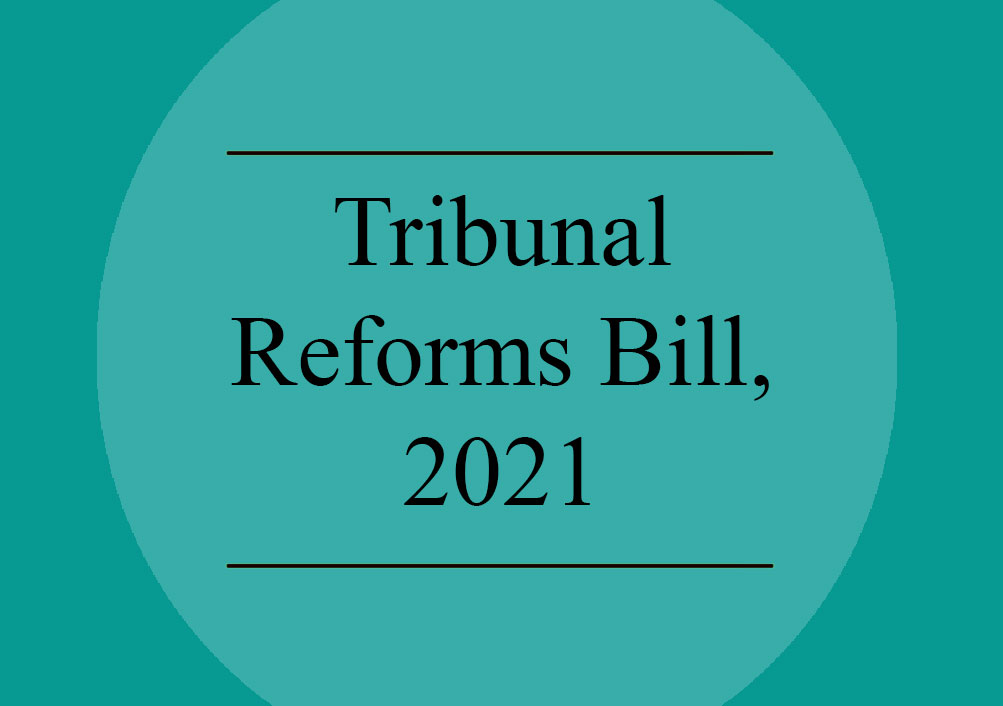 August 20, 2021: Proposing to abolish certain key Tribunals and Authorities and to provide for a mechanism to file Appeal directly to the Commercial Court or the High Court, the Tribunal Reforms Bill was introduced in the Lok Sabha by the Finance Minister, Nirmala Sitharaman, on August 2, 2021. It was passed by the Lok Sabha on August 3, 2021 and by the Rajya Sabha on August 9,2021.

This Bill replaces the Tribunals Reforms (Rationalisation and Conditions of Service) Ordinance, 2021.

The Appellate Tribunals, under the Cinematograph Act, 1952, Copyright Act, 1957, Customs Act, 1962, Patents Act, 1970, Airports Authority of India Act, 1994, Trade Marks Act, 1999, Geographical Indications of Goods (Registration and Protection) Act, 1999, and Control of National Highways (Land and Traffic) Act, 2002, have been replaced by the Commercial Court or the High Court.

In the Transitional provision, the Bill has clarified that any person appointed as the Chairperson or Chairman or President or Presiding Officer or Vice-Chairperson or Vice-Chairman or Vice-President or Member of the Tribunal, Appellate Tribunal, or, other Authorities specified in the Second Schedule and holding office as such immediately before the notified date, will cease to hold such office on and from the notified date.

Such office holders will be entitled to claim compensation not exceeding three months’ pay and allowances for the premature termination of term of his/her office or of any contract of service.

The Bill has also laid out uniform terms and conditions of service for Chairperson and Members of various tribunals, including the Search-cum-Selection Committee .This Committee, introduced by the Bill, will be giving recommendations to the Central Government regarding the appointment of  the Chairperson and the Member of a Tribunal. For State administrative Tribunals, there will be separate Search-cum-Selection Committees.

Provisions have also been made for re-appointment. As far as salary and allowances are concerned, the Central Government has been vested with the power to make rules to provide for the salary of the Chairperson and Member of a Tribunal.

The Central government has also been empowered to make rules to provide for the qualifications, appointment, resignation, removal and other conditions of service of tribunal members.

Regarding the issue of pending cases, the Bill postulates that any appeal, application or proceeding pending before the Tribunal, Appellate Tribunal or other Authorities, other than those pending before the Authority for Advance Rulings under the Income-Tax Act, 1961, before the notified date, will stand transferred to the Court before which it would have been filed had this Act been in force on the date of filing of such appeal or application or initiation of the proceeding, and the Court may proceed to deal with such cases from the stage at which it stood before such transfer, or from any earlier stage, or de novo, as the Court may deem fit.

This Bill comes at a time when the Apex Court had struck down certain provisions of the Tribunal Reforms (Rationalisation and Conditions of Service) Ordinance, 2021 regarding conditions of service and tenure of Tribunal Members and Chairperson, in the judgment of Madras Bar Association v. Union of India & Another.

Now, challenging the constitutional validity of the Tribunals Reforms Act 2021, proposed by the Bill, Member of Parliament, Jairam Ramesh, has moved the Supreme Court.

Recently, the Top Court has also granted 10 days time to the Centre for making appointments to various Tribunals. The Apex Court questioned the fact that even though recommendations were given by the Selection Committee still the appointments were not made, and also expressed its critical views on the passage of  the Tribunals Reforms Bill, 2021.